At the Core of the Matter 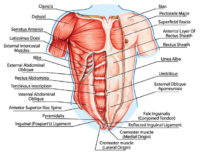 Jacob is friendly, sociable 4th grader. Although he has many friends and is socially successful, Jacob refuses to play sports during recess. While his classmates play tag, basketball or football, Jacob sits at his desk in the empty classroom. Jacob is otherwise a healthy, happy child, and when asked why he won’t play sports, Jacob usually complains that he is too tired or not interested.

The body is similar to a tree with branches supported by a central trunk. Without the healthy trunk, the branches lose their leaves and wither. The core muscles are the “trunk” of the human body; if those muscles are weak, the entire body will be negatively affected. Maintaining a strong body core is important at any age; balance, posture and back health have been linked to core strength. Your core is the vital “foundation” of all your body’s movements, whether you are walking, carrying a heavy bag, or playing a sport.

Jacob’s core was so weak that his body could not properly support the outer extremities (arms and legs) and he did not have the strength and stamina to participate in games that required extensive physical exertion. The weakness in his core muscles also resulted in decreased body awareness which made him clumsy and unsuccessful at sports that require precise movement and coordination. Jacob refused to participate in sports because they made him so tired and because he “wasn’t good at it,” due to his lack of coordination. He was simply embarrassed in front of his friends.

Jacob needed a stronger core. By strengthening his core, the outer muscles would have the support necessary to function properly.

The therapist prescribed repetitive exercises to build strength in the core muscles. These activities included the “Superman pose,” where the child lies on his stomach and raises his arms above his head and his legs as high as possible. Other exercises included sit ups, push ups, and leg lifts. Each of these actions utilized the core muscles and, by repeating them over and over, built strength in the core.

To address the underdeveloped body awareness, the therapist used targeted activities that combined techniques for improving core muscles with activity that would create new neural networks. When Jacob swung from side to side holding onto the bottom of a tire swing, he strengthened his core while simultaneously improving his body awareness.

With a stronger core, Jacob found he had the strength and stamina to participate in sports with his friends. His improved body awareness and coordination made him perform much better, too. By the time Jacob completed his course of therapy, he had a newfound sense of confidence and enjoyed playing ball every day like the rest of his friends.

This site uses Akismet to reduce spam. Learn how your comment data is processed.